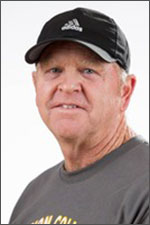 Scott was hired as the Women's Tennis Coach and Kinesiology Instructor in August 2000. In 2008, Scott began coaching the Men's college team through Spring 2019.

Scott has been teaching kinesiology courses at the community college level for over three decades years. He also coached the Women's soccer team at Mission College. He teaches a wide range of courses, such as Archery, Yoga, Weight and Cardio training, Badminton, and Tennis.

Scott began his coaching and teaching career instructing tennis. He emphasizes the importance of balance, footwork, and proper mechanics for ultimate improvement, but he also highlights the importance of lifetime fitness as a goal for his students. Movement-based activities are vitally important to the overall health and quality of life of individuals.

Scott played tennis collegially at Napa Community College (now Napa Valley College) and at UC Santa Cruz. At Napa, Scott was the conference champion both. He transferred to UC Santa Cruz, and played for two nationally-ranked teams and earned the NCAA All-America status. In 2011 Scott was inducted into the Napa College Hall of Fame for his playing and coaching career.

A Community College Education is a critical step for students to continue their education beyond high school, transfer to a four-year college, reeducate for career changes, or for the person just aiming to increase their knowledge. Scott promotes the power of knowledge and insists his students learn new information every day.

He empowers his students to improve their skills and achieve their highest level by teaching the most current information and techniques. Teaching Kinesiology, sport, and athletics, has been Scott's life and has become not only a career but a lifestyle and philosophy for his students and his own life.