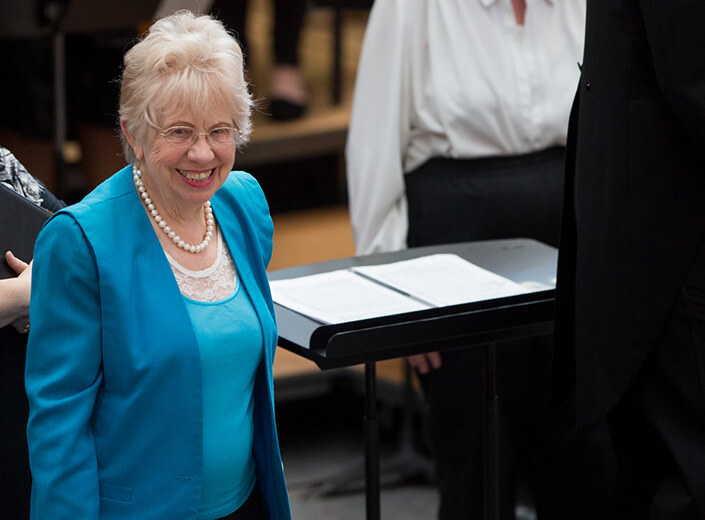 Nancy Bloomer Deussen [b. 1931] is a prominent San Francisco Bay Area composer and co-founder of the Bay Area chapter of The National Association of Composers,USA. She has been a dedicated champion of more accessible contemporary music, a viewpoint amply demonstrated in all of her works.

She has also been named as one of the first five "Honored Artists of The American Prize" for 2014, awarded to "individuals who have proven themselves to be musicians of sustained excellence over a number of seasons." 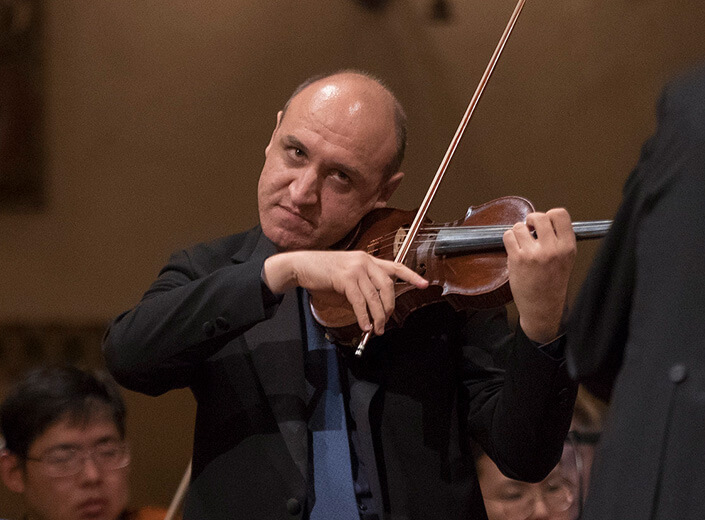 Jassen Todorov has distinguished himself as one of the most prominent violinists of his generation. Dubbed “an outstanding violinist…a player to watch” by the British music journal The Strad, Mr. Todorov has given numerous performances throughout North America, Europe, Asia and Australia.

He is also an active performer in his native Bulgaria, where he is considered one of the country’s most prized musicians. With a repertoire including works from all styles and epochs, Mr. Todorov has recorded the complete sonatas of Bach, Brahms and Ysaye, as well as Beethoven’s Sonatas Nos. 6 and 10.

The Strad described him as “a violinist of rare technical ability…he brings musicality to his performances…his left hand is able to deliver Ysaye's demands in the many mercurial passages with commendable accuracy” and the American Record Guide portrayed it as “high praise…an important release for admirers of Ysaye’s music.”

Mr. Todorov began his musical education in Bulgaria and furthered his studies at the Idyllwild Arts Academy, California. A top prize winner of several national and international competitions, he earned his bachelor’s degree in violin performance from Harid Conservatory, Florida, and his master’s degree from the Eastman School of Music, New York. From 2000 to 2003, he served as the teaching assistant to Professor Oleh Krysa at the Eastman School and held a violin position at the University of Rochester.

Mr. Todorov is the recipient of full scholarships and prestigious awards including the Eastman award for excellence in teaching (2002) and the Crystal Lyre for achievements in music (2006). From 2008 to 2010, Mr. Todorov served as the Director of the School of Music and Dance at San Francisco State University. 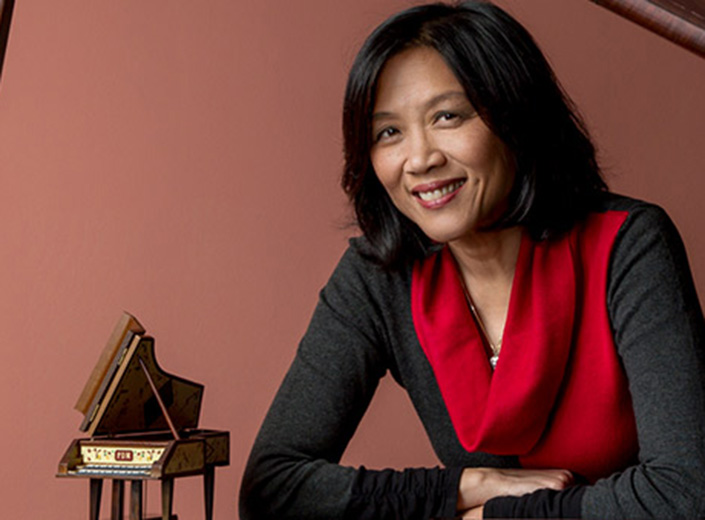 From there she went on to win several piano competitions.Born in New York, Ms. Mok has appeared in many of the world's leading concert halls including The Barbican,Carnegie Hall, The Kennedy Center, Avery Fisher Hall, Alice Tully Hall, and The Hong Kong Performing Arts Center.

In his 90th year, Vlado Perlemuter chose Mok to be the last student to whom he would pass on his knowledge of Ravel. In 1927, Perlemuter --a student of Ravel's-- sat at the keyboard of his tutor's Erard grand piano and worked his way through Ravel's entire oeuvre along with the composer. In 1994, the French Ministry of Culture awarded Ms. Mok a grant to study with Perlemuter for one year.

Since 1995, Mok has been performing Ravel's works in recital and was invited to teach these works at the Royal College of Music, Welsh College of Music, The Dartington International Summer School in Devon, and The San Francisco Conservatory of Music. In 1996, Ms Mok made her official London debut in two concerts of Ravel in Somerset House, on a restored Erard grand piano of 1875, in the Great Room of the Courtauld Galleries.

Mok's production, Ravel and the Post Impressionsists, was sponsored by Citibank UK. She was also featured in broadcasts of Ravel on BBC Radio 3, Music Matters, Woman's Hour and the World Service.

Ms Mok is a recording artist for Nonesuch/Elektra, Musical Heritage Society, Cala Records, and EMI. She can also be heard on several movie soundtrack recordings of music by Maurice Jarre. Her highly acclaimed debut CD with The Philharmonia of Ravel's Piano Concerto in G Major (released on the Cala label) was nominated for an Alternative Edison award in the concerto category.

A second CD of Saint Saen's Africa-Rhapsody for Piano and Orchestra with the London Philharmonic has been equally applauded and is broadcast frequently. 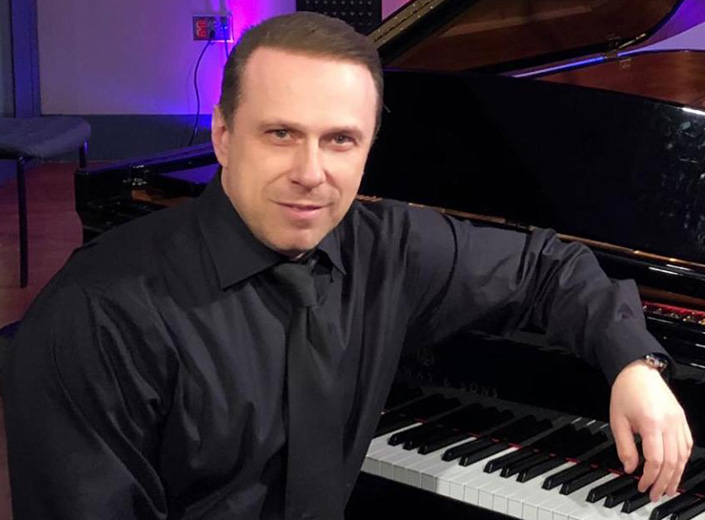 In addition, he studied as a full scholarship student at the Van Cliburn International Summer Piano Institute, where he was under the tutelage of distinguished musicians Paul Badura-Skoda, John Lill, Fanny Waterman, and György Sebök. Mr. Resnianski holds a Doctoral degree from Temple University in Philadelphia where he studied with Professor Harvey Wedeen. His Monograph advisor was Dr. Alexander Brinkman.

In June 1996, Mr. Resnianski made his concerto debut in America performing with the Fort Worth Symphony Orchestra under conductor Keri-Lynn Wilson and in South America performing a solo recital at the International Music Festival in Medellin, Colombia.

Named by Pennsylvania Music Teaches Association "2012 Music Teacher of the Year" for the State of Pennsylvania, Dr. Resnianski is highly sought-after teacher who regularly gives master classes throughout the US and abroad. For many years, he served as a faculty and guest artist at the TCU/ Cliburn Piano Institute Fort Worth, Texas. Since 2006 he is on the faculty of Piano Texas International Academy and Festival in Fort Worth.

For several years he gave lectures at Rutgers University in Camden, NJ during the Mozart summer course. He is a regular faculty of the New Orleans Piano Institute, the University of Houston Piano Institute and the California Concerto Weekend for Amateur Pianists and gives master-classes and presentations for the Main Line Music Teaches Associations in Philadelphia. 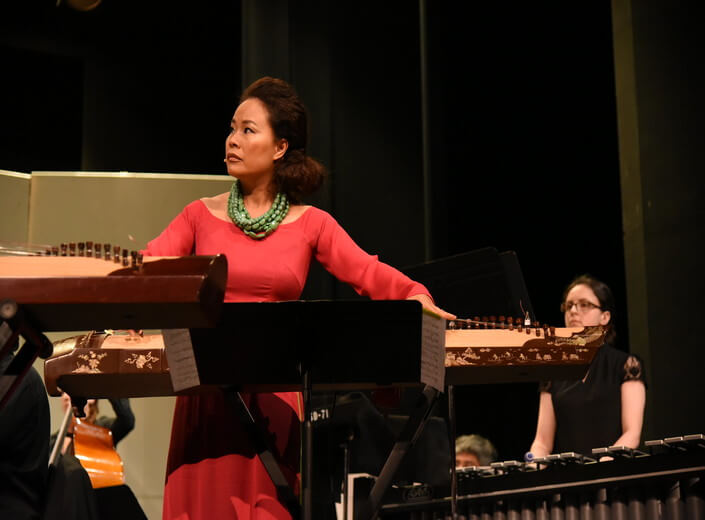 Vanessa Van-Anh Vodedicates her life to creating music on the dan Tranh (16-string zither) and other traditional instruments of her culture, fusing her traditional Vietnamese foundation with a freshness of new structures and compositions. Since settling in California, she has been a collaborator and solo artist with such musicians and groups as Kronos Quartet, Nguyen Le, Paul McCandless, Ali Ryerson, Charles Loos, SOMEI Taiko Ensemble, Wobbly World, Winnie Wong and the China Spirit Music Ensemble as well as lending her talents to fundraising events for several non- profit organizations.

Continually cultivating the beauty and versatility of the dan Tranh to feature her beloved instrument in an international music genre, Van-Anh has been co-composer and arranger for the film Daughter from Danang (2002) which was nominated for an Oscar® and won the Sundance Grand Jury Prize for Best Documentary.

She has also been a co-composer and performer on the soundtrack for the Emmy® Award-winning program Bolinao 52 (2008), and the multiple award-winning film A Village Called Versailles (2009).

Recently, Van-Anh released her newest CD “She’s Not She” with award-winning composer Do. Ms Van-Anh began studying the dan tranh from the age of four, and graduated with distinction from the Vietnam Academy of Music. In 1995, Van-Anh won the championship in the Vietnam National Dan Tranh Competition along with the first prize for best solo performance of modern folk music.

She has since performed in more than fourteen countries and recorded in many broadcast programs inside and outside of Vietnam. Her first CD “Twelve Months, Four Seasons” was released in 2002. She lives in California where she teaches dan tranh and other Vietnamese traditional instruments, and has been chosen to be a speaker and performer at the TEDx conference held there in October 2011. Van-Anh Vanessa Vo has been a highly valued member of the Listen for Life family since 2010, when she was one of 120 international musicians who generously donated their cultural gifts to perform in Listen for Life’s annual UN International Peace Day that we held in the United States, UK, and Eastern Europe.

She has been helping to plan and prepare this special program for Carnegie Hall and beyond, as she is excited to represent her Vietnamese culture and instruments in other locations and venues. 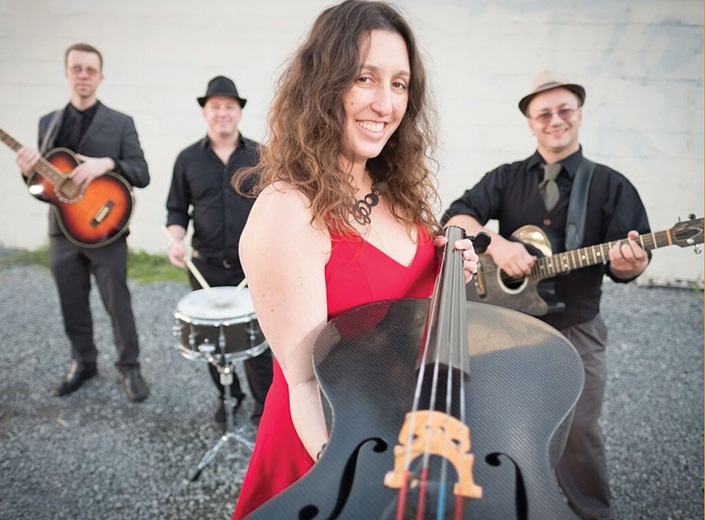 In the classical world, Rebecca Roudman is a respected cellist who is a member of the Oakland East-Bay Symphony and the Santa Rosa Symphony. She has also performed with the Women’s Philharmonic Orchestra, Modesto Symphony, Monterey Symphony, San Francisco Ballet Orchestra, Santa Cruz Symphony, and Vallejo Symphony. Rebecca has soloed with the Cal State Hayward Orchestra, the Marin Chamber Orchestra, the Classical Philharmonic, the Ohlone College Orchestra, and the Women’s Community Orchestra. As part of her classical adventures, Rebecca has toured Europe and Brazil, backed up Issac Hayes, and been in an Acura car commercial.

In the world of rock n’ roll, jazz, world, and folk music, Rebecca has taken her strong skills on the cello to an even higher level performing with an amazing assortment of bands. These include (but are not limited to) Juliette Commagere at the Great American Music Hall (opening for Ry Cooder and Elvis Costello), with the Danny Click band opening for JJ Cale, backing up Melissa Manchester, and a performance at Oakland’s Fox Theatre of live video game music for the Video Game Live World Tour.

Rebecca also has her own YouTube channel where you can see her collaborations with Anna Laube (singer- songwriter) Jason Eckl (world percussion) Paradiso (didgeridoo artist) and Ashley Seaton (operatic soprano.) Rebecca also shares her love of music by teaching a large after-school string orchestra program in Novato, working in the Oakland schools through the Oakland East-Bay Symphony’s MUSE program, and by assistant teaching at Sinaloa Middle School in Novato.

We’re here to help. Contact us if you have questions.