Located in the Hospitality Management Building

This high-profile annual event, coordinated by the History department, reaches our students, connecting them with leaders in the community, and at the national level.

It meets the goals of diversity, inclusion, fostering growth and learning, and broadens Mission College's exposure to a larger community.

The intention of the program is to educate students about the contributions of women both historically and now and encourage them to take on leadership opportunities in their communities and in the world.

This award (WLCW) recognizes women, including women of color, who have had a profound impact on the world and/or in their fields.

They are selected for this award because their leadership has been a positive influence in their communities and their commitment to making a difference in the world makes them an important example to others, and this clearly demonstrates the importance of women in leadership positions.

The women selected are presented with the award and do an interview which is formulated into a filmed broadcast, which is viewed at the networking reception.

Award recipients also attend the reception so that students can network with them and other local leaders in the community. 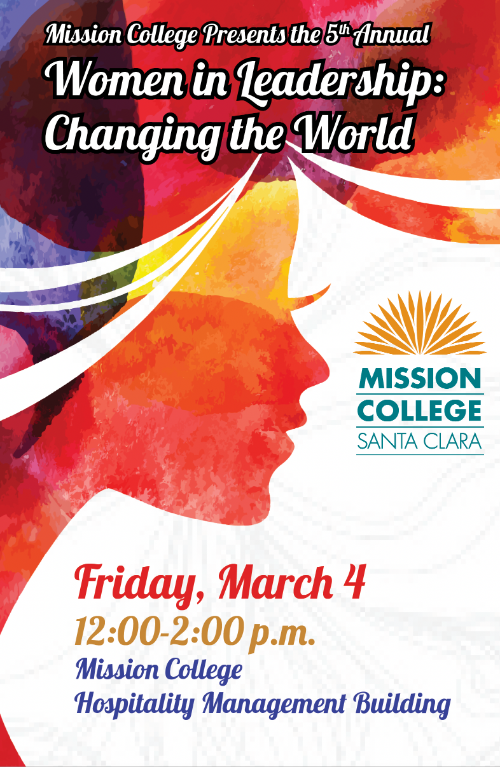 Alvarado worked with Cesar Chavez to establish the Community Services Organization and was involved with the Chicano Employment Committee and the Opportunities Industrial Center. She was president of the local chapter of the Mexican American Political Association and was also an officer at the state level.

In 1980, she was elected to San Jose City Council for District 5; she represented East San Jose until 1994. Alvarado served two terms as San Jose’s first Latina Vice Mayor. In 1995, she was appointed to fill a vacant position in the Santa Clara County Board of Supervisors; she was elected to the position the following year and spent 12 years representing District 2.

During her time in office, she fought for better representation of the Chicano community of San Jose, helped foster the arts and advocated on behalf of youth and minorities.

Alvarado also served in several committees such as the Children and Families’ Committee and Public Safety and Justice Committee. She also served as vice-chair of San Jose’s Redevelopment Committee, as chair of the Community Services Committee and as city council liaison for the city’s Fine Arts Commission.

She played a significant role in lobbying for the Hispanic community of the city including improving representation on the city’s decision-making bodies and the development of facilities such as a new Youth Center. Alvarado was also active in efforts to improve Santa Clara County’s juvenile detention system.

She established an Office of Women’s Advocacy for the county to develop programs to help women develop in their professional and personal lives.

In 2002, Alvarado was awarded the Woman of the Year Award by the San Francisco Bay Area Chapter of the Women’s Transportation Seminar, an international organization dedicated to the professional advancement of women in transportation, recognizing her contributions as a member of the board for the Santa Clara valley Transportation Authority.

Anne Marie Anderson is a multiple Emmy award winning veteran sports broadcaster who has worked in a wide variety of roles both behind and in front of the camera. Over the course of her career she has covered six Olympic games, NBA Playoffs, the Superbowl, Golf’s majors, MLB Playoffs, heavyweight title fights and big games in a variety of collegiate and professional sports.

Anne Marie is known for her versatility having spent time anchoring in the studio, reporting from the field and calling a variety of sports live.

As one of the most experienced female play by play announcers in the country, Anderson enjoys the ever-changing landscape of sports and the stories that shape the athletes competing. Her career began while still at Hofstra University where she was a student by day and worked for SportsChannel at night.

After graduation Anderson moved on to ESPN where she worked her way up over the course of a decade from production assistant to bureau producer before making the leap to the other side of the camera.

With three Emmy awards under her belt for her behind the scenes contributions to ESPN’s SportsCenter Anderson set out for a new challenge in front of the camera in 2000. Since then she has done features and live shots for ESPN’s Outside the Lines, NBA Today and SportsCenter and enjoyed years on the college football sidelines.

It was a short trip from the sidelines to the game table when Anderson started calling live events in 2005 now having called volleyball, basketball, soccer, softball and track and field for a variety of networks including ESPN, CBS College Sports, Fox Sports and The Pac 12 Network.

An avid sports fan and participant, and mother of three, Anne Marie enjoys playing beach volleyball, running, hiking, swimming … and any game in which you keep score!

In 1998 she was elevated to the Alameda County Superior Court. Prior to her appointment to the bench, Judge Bereola was an attorney in private law practice and before that she served as a prosecutor in San Francisco. She also served in the US Army Reserve JAG Corps for 12 years and retired as Major.

Upon unification of the courts in 1998, Judge Bereola served as a Supervising Judge of the Superior Court from 1998 – 2000 and as Presiding Judge of the Juvenile Court from 2006 – 2010. Currently assigned to the East County Hall of Justice in Dublin, Judge Bereola has served in a myriad of assignments throughout her judicial career, including Collaborative Drug Court, Clean Slate, Criminal Arraignments and Trials, Criminal Master Calendar, Civil Direct Calendar and Trials, Juvenile Dependency & Delinquency, Welfare Fraud, Unlawful Detainers, Criminal and Civil Law & Motion, and the John George Mental Health Court.

She has served as Vice-Chair of the Juvenile Court Judges of California, as faculty for the Judicial Council’s Center for Judicial Education and Research (CJER), and as a Seminar Group Leader for new judges required to attend the California Judicial College. Throughout her career, which spans 42 years as both an attorney and judge, Judge Bereola has received numerous awards and recognitions for her work in the law and in the community.

For example, in 2013 she was named Trial Judge of the Year by the Alameda- Contra Costa Trial Lawyers’ Association. In 2016 she received the Ubuntu Award from Restorative Justice for Oakland Youth (RJOY), for outstanding contributions to restorative justice.

Throughout her legal career, Judge Bereola has been a member and served in leadership roles of various legal and community organizations.