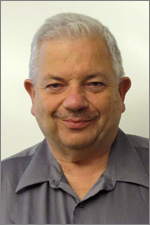 Dr. Russakovskii has been teaching at Mission College since Fall-2002. He teaches all classes in Math, starting with Basic Skills (Arithmetic Functions and the like) and ending with Higher Math (Calculus and beyond) courses.

In 1998, Dr. Russakovskii published in Russian a book about English verbs "Encyclopedia of English Verb Forms: Rules and Exceptions" (this is one of his hobbies) describing all (!?) English verbs with a non-standard grammatical paradigm. His book lists 1209 irregular verbs, with 297 of them being monoomorphemic, which exceeds the corresponding figures given in "The Guinness Book of Records."

Since 2006, Eugene Russakovskii is considered to be a Top Expert in three types of Extreme Sudoku (weekly competitions in Sudoku, Killer Sudoku, and Jigsaw Sudoku) according to the newspapers "Daily Telegraph" and "The Los Angeles Times".

Eugene has 25+ years' teaching experience both in Ukraine and United States (in California), and this helps him teach students in a better way, creating a a stimulating and challenging learning environment, using numerous comparisons and felicitous sayings. He has sincere commitment to success of the diverse student population.

When teaching, Eugene considers himself as a liaison between his students and Math (he uses a slightly jocular term "Mathematical Heavens"!). If Eugene ever makes an error or typo (rather rare situation, but he is just a human being!), his students are always welcome to mention and correct it: Math is Math!

Eugene has a son Artem born in 1983. At the end of 2012, Artem and his wife Milla gave birth to their son Matthew (Eugene's grandson). Artem graduated from UC Davis with B.S. in Computer Science and in a while became a public person widely known by many Android fans in U.S. and beyond: he is a founder and Chief Editor of a very popular web blog Android Police (androidpolice.com) dedicated to Android.

Periodically, this web blog is cited by CNN, BBC, thousands of other information resources, and many world conferences in modern technology invite Artem to attend and then write articles.

"Just Do it!" (slogan and trademark Nike, Inc.) Eugene tells this his students who just speak about Math and do not start doing it.

"Trigonometry is not a piece of cake; rather it's a piece of pie π !" - Eugene Russakovskii